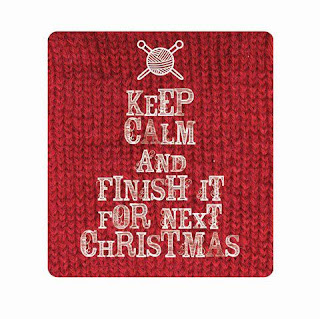 Thank you Kai for posting this today! I had to laugh.  I was going crazy the last few days before Christmas.  I didn't know how I was going to get everything done in time.  I had made a crazy promise with my friends that everything was going to be "handmade".  Ugh! 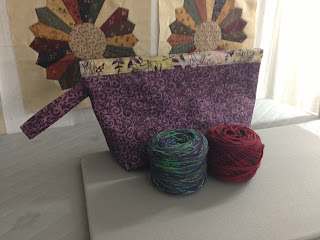 Turns out I got everything done in time.  It worked out because I saw some people before Christmas and some a few days after.

Yesterday, I finished a project bag for a friend (it was on the list).  She wanted extra room, enough for to cakes of yarn.  When I was making it I thought it looked a little funny, but it really grew on me.  It's like a large clutch bag that you can hold under your arm if you want to.

I'm going to try to finish a couple more bags today before meeting up with some knitting friends tonight.

Posted by CharmedYarn at 11:05 AM No comments: Links to this post 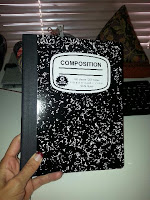 I bought a composition notebook the other day.  I have big plans to finish all the projects that I have started over the last couple of years.  This includes all quilting, sewing, knitting, and crochet projects.

﻿﻿﻿﻿﻿
After Christmas dinner I went through all my cabinets and project bags looking for anything that I started and had not finished.  I wrote them all down in my journal.  I gave each project a page.  This way I could make notes about each one.  For instance, things I need to finish it, needles used, yarn used, dates completed.  Even just writing that I gave up and frogged the project.  So far I have 25 pages with projects written on the top of each one.
﻿


﻿
Posted by CharmedYarn at 10:56 AM No comments: Links to this post

I don't have time to write a large blog post, so I am just posting a pattern that I wrote yesterday. 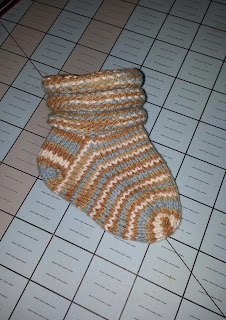 Enjoy :-)  I also posted it on Ravelry

-Chantal
Posted by CharmedYarn at 11:59 AM No comments: Links to this post

I'm Back But Doing Things Differently

I am going to try and resurrect this Blog.  I want a different spin on it.  I haven't posted in a long time because after posting on Ravelry, Facebook, Instagram and Meetup, it seemed redundant.

I want to write some things down because I know that my kids are not listening to me.  I want to get them ready for life own their own.  They sort of tune me out when I try to show them and easier way of doing things, tricks, a family recipe, memory, pattern or story.  This idea came about while I was making some soup this afternoon.  They crave this soup.  They insist on having some when they are sick.  They are young adults now so they have come to realize that it works for hangovers too.

I am also going to me a grandmother soon.  I feel as though I should write some things down so they are remembered, maybe even treasured. I have very few things from my mother.  This actually hurts me sometimes...  I don't want my children to feel the same way.  I worry that I will forget some of her recipes in my later years and that they will end with me.

My mother-in-law Pat is and has always been very loving and kind.  She shared so many things with me when I married her son and while I was a young mother.  She helped shape who I am today. She settled me down,  made me see what family could be like.  It was not what I was used to.

Well anyway, there so many things that I would like to write down and save. I thought I would share them with you as well as my children.

Posted by CharmedYarn at 6:38 PM No comments: Links to this post

CharmedYarn
Knitting is a boon for those of us who are easily bored. I take my knitting everywhere to take the edge off of moments that would otherwise drive me stark raving mad. ~Stephanie Pearl-McPhee, At Knit's End: Meditations for Women Who Knit Too Much